The first Purple Poppy Memorial was unveiled by the Lord-Lieutenant Moira Niven MBE on Monday 23rd August. Located on the corner of Main Street and Ecclesmachan Road in Uphall, it is a fitting Memorial to remember the millions of Animals that have served and sacrificed their lives in War.

ASA Scotland Chairman John Jenkins said “We wanted to create a fitting memorial to remember the millions of Animals that have served and sacrificed their lives. We often think of the human sacrifice in Wars and Conflicts, and forget about the animals who did their duty to the Nation during WW1, WW2 and to those who still serve today with the Armed Forces or Police across the Nation, People can visit the Memorial in year’s to come and pay their respects, we will be launching an educational booklet for this event”.

The next meeting of Uphall Community Council will be held on Wednesday 15th June 2022 from 7.30pm. This will be our Annual General Meeting

All future meetings will be hybrid, with a mix of online and in-person attendees. This will ensure our meetings are accessible to all.

WW1 Those who Served & Fell

The book 'Broxburn & Uphall War Memorials and the Men who Served and Fell in WW1' by Meg Stenhouse can be viewed by clicking on the image. 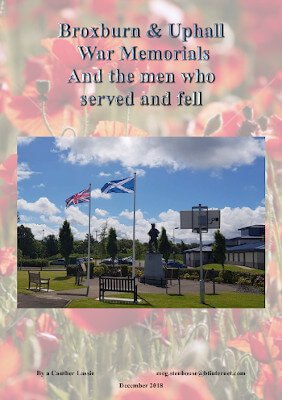